Kansas transitioned us from the West to the Midwest.  Driving east on Interstate 70, we don’t have any of the openness of the West.  The highway reminds me of some in Ohio or even North Carolina.  Even the highway rest area is more Virginia than Kansas.

The road cuts expose rocks like those in Kentucky or Connecticut.  And the state is evidently trying to compete with North Carolina for the best-upholstered roadsides, sheathed in billboards.  (Georgia is also in the competition, but both will have to go a ways to surpass North Carolina.)

We got off the highway at Overton to see if we could get close to the Missouri River.  The town of Overton evidently has only two houses and some outbuildings.  The road continues into the Big Muddy Wildlife Refuge.  We kept on the gravel road even after it turned to hardened mud.  We crossed the first puddle all right but bottomed out on the second.  The third, which is not visible in the picture, was even larger, so I executed a smooth 7-point turn to go back through the first two puddles and back to the highway.  We didn’t get to see the river except from the highway. 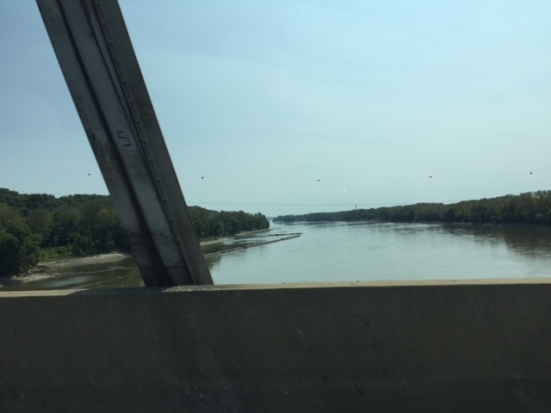 On a friend’s recommendation, we went into downtown Columbia for a wonderful lunch at Bangkok Gardens.  (Thank you Eddie!)  And then to the charger out by the highway. 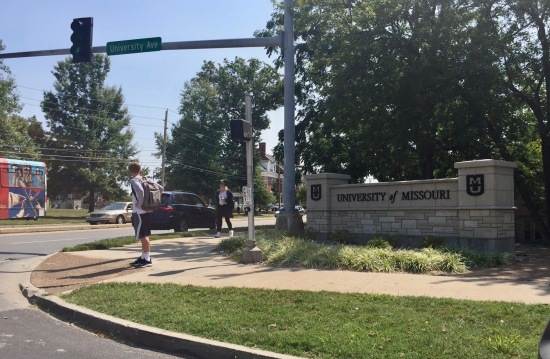 Traffic was heavier and faster and more frenetic the farther east we came, with cars cutting in and out and lots of trucks.  We were glad to find refuge in our motel in St Charles. 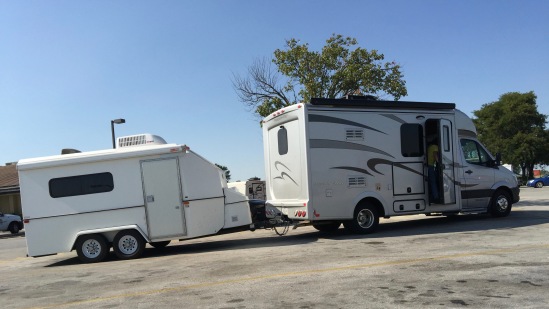 At one stop along the highway, we saw what appeared to be an RV with a mother-in-law apartment.  We watched as a middle-aged woman slowly helped an elderly woman with a cane up to the rig.  But then we saw the back of the trailer and think now that it houses a Harley.

On these trips, we plan to drive about 350 miles each day.  Today the plan was for 285 miles, but we still got here about the time we like to stop for the day.  Even with the more frenetic traffic, we arrived more relaxed than we sometimes do.  Perhaps we need to start thinking of planning shorter days, so we can drive into a downtown or the mud of a wildlife refuge.