There are a lot of factors when planning one of our trips.  Perhaps it is a sign of our age or of the age.  I once hitchhiked from southern Ohio to Chicago with no more idea than to get there and back.  But as I get older, I want more assurances.  Sleeping on a picnic table or in the car at a highway rest stop is no longer an option I’m willing to consider.  And I hate spending an hour or more looking for a motel after driving all day.  Have you noticed they don’t put ‘Vacancy’ signs out anymore?  We’ve encountered towns where some event that we had no knowledge of is happening and every motel room for 50 miles around is already taken.

We’ve had some long trips, but now it seems that five weeks on the road is about all we want to do.  We love to get away and ride down the highway, but after five weeks, we want to be home again.  Living on the west coast, this makes visiting the east coast more difficult.

There were times when I thought nothing of traveling 500 or more miles each day.  I would get up early and get on the road, drive until suppertime and find a place to stop.  Now our target day is about 350 miles, and even that can seem a little long.

And now we have an electric car.  There are still fewer chargers than there are gas stations.  And we want to charge it quickly.  We can get over 200 miles of range in less than an hour at a Tesla charger.  It would take four hours or more at another kind of charger to get that range.  So we want to take the routes that have Tesla chargers along the way.

And we have people and places we want to see along the way.  For this trip we planned visits in Idaho, Colorado, Kansas, Missouri, Rhode Island, Pennsylvania, Maryland, Illinois, and Iowa.  Along the way, we managed to add short visits in Wyoming and Massachusetts.

So, planning a trip has become like fitting a jigsaw puzzle together.  I love that kind of activity — it is part of the pleasure of traveling — but it ends up being a rather tight-fitting structure.  But changes happen.  Our April trip this year encountered a blizzard, and we had to return home through Nevada instead of Montana.

Yesterday, the Maryland friend that we were planning to stay with wrote to say he has a bad cold, and he didn’t want to give it to us while we are on the road.  So we booked a motel room instead of staying at his house.    Because we would visit only for supper, we stayed the morning in Scranton to go back to Steamtown and ride a steam train.

We met our friends, the one with a cold and his husband, at a restaurant for supper.  It was wonderful to see them both, and I’m glad we could include a visit, even if it was too brief and didn’t include enough hugs.

Because we had planned to stay with them for two nights, we now have an extra day.  What shall we do with it?  We’ve been on the road for 19 days now.  Having a day off sounds good.  Trying to cram as much as we can into it doesn’t appeal, and it isn’t enough extra time to add a big side trip.  We’ve decided to travel short days and perhaps find what we can to see along the way.

We didn’t leave our Maryland hotel this morning until almost 10 — much later then usual.  We drove west under low clouds.

We stopped at Sideling Hill to see the cut they made through the hill for the Interstate.  The hill is like an inverted U, but the exposed rocks are shaped like an upright U.  It’s certainly counterintuitive and demonstrates the forces that created these old mountains. 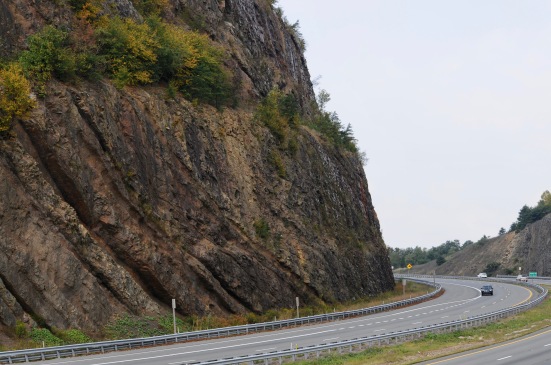 We left the interstate after crossing the eastern continental divide that separates the waters that flow to the Atlantic and those that flow to the Mississippi and down to the Gulf.  We drove on US 40, the old National Road.  We kept thinking how difficult it would be to ride this road back in the early 1800s.  How would the farmers get their crops to market?  How would they get anything they couldn’t raise or make locally?

When I went to college in southern Ohio, I would regularly drive US 40 from there to the Baltimore area.  The interstate highways were just being built, but the stretch from eastern Ohio, through the rough country of the northern panhandle of West Virginia and the hills of southwestern Pennsylvania were all on US 40.  Back in the day of only AM radio, there were a few superstations that broadcast all night with higher power.  I would listen to the music and preachers on WWVA out of Wheeling, West Virginia as I drove through the night, winding up and down the hills and through the tiny towns.  Many of these towns still have only one street — US 40, the National Road — with the houses all crowding the edge of the road.

A lot of Pennsylvania always looks a little raggedy to me.  And it certainly seems like we travelled greater distances in construction zones than not in them.  It was nice to get to the good roads of West Virginia and Ohio.

Crossing the Ohio River at Wheeling, I felt like we were no longer in the East.  It will take us more than a week, though, to be in the West.  We have a few stops to make along the way.

2 thoughts on “The Best Laid Plans …”