Some areas of Utah are beautiful.  Other areas not so much.  Still tired from the long day yesterday, we got a late start.  (I should have washed the windshield.)

This day would all be on interstate highway, fast and not challenging — an easy day.  Interstate 15 runs more or less up along the front of the Wasatch Range of mountains, mountains to the east and desert to the west.  Most of Utah’s population lives along I-15.  They have transformed much of the arable land into farms, pumping water from reservoirs — water that would otherwise be unusable once it reached the Great Salt Lake.

We passed areas with lots of trees.  What kind are those we wondered.  My father could identify trees, and I really enjoyed hearing him name them and perhaps talk about them.  But I never learned to do it myself.

When we travel along, we wonder what it would be like to live here — whatever “here” we were at the time.  What would life be like?  Would we enjoy it?  Years ago I would think: I could live here.  But as the years go on, there are fewer places I think I could be happy.  Am I just getting old?  Or is it that I have a better idea of where I might fit in?

We also sometimes wonder how the people who do live there put food on their table.  Along I-15 we didn’t wonder, with all the farms and tight little communities. 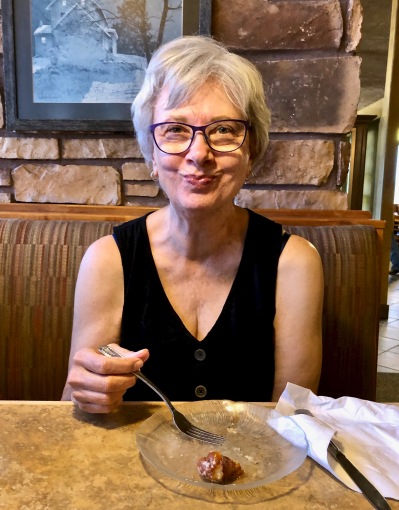 Andrea: “Every road trip deserves at least one gooey cinnamon roll.”  She’d already eaten most of it before mentioning that.

As we approached the megalopolis, we could see smog in the air.  Andrea turned on the biohazard setting in the car.

At Payson, the highway widened to four lanes northbound, then five, then six.  Driving through the highway construction in Lehi was like a gymkhana.  The six northbound lanes went from old pavement to temporary pavement to new pavement and back again.  And again.  And again.  At one point the three right lanes went one way and the three left another.  They wound around and then rejoined a couple of miles later.  No one seemed to want to slow below 70 mph.  A frisson was added at the point where a pickup pulling a large stock trailer had broken down in the right lane with no place to pull over.  It was all very exciting.

We checked into our motel at 3:30, happy to be north of the city to avoid the worst of the Monday morning rush tomorrow.  The motel has six (6!) Tesla destination chargers.  When I am planning to stay where there are destination chargers, I always worry that they will be blocked or in use.  These are considered fast chargers and will fill our batteries in four hours.  (The superchargers will fill them in one hour.)  The motel in Susanville had two chargers.  Once I thought I had enough charge, I went out to unplug and move the car.  The other charger was being used and another Tesla was waiting.  He was happy to get access to my charger.  But with six chargers — no problem.

We’ve been on the road long enough and got in early enough, we’re doing laundry.  Good thing, too.  At lunch, being a good Portlander, I was drinking my Diet Pepsi without a straw when the ice shifted and I slopped cola down my front and into my lap. Oh well.

Traveling only by interstate, I didn’t take many pictures.  Maybe tomorrow.