I’m not sure that Montana has land use laws and regulations.  Bozeman has a hodgepodge of residential, commercial, and industrial development leapfrogging across hay fields out onto the plain of the Gallatin Valley.  I have a negative emotional response to that kind of sprawl.  But the area is beautiful. 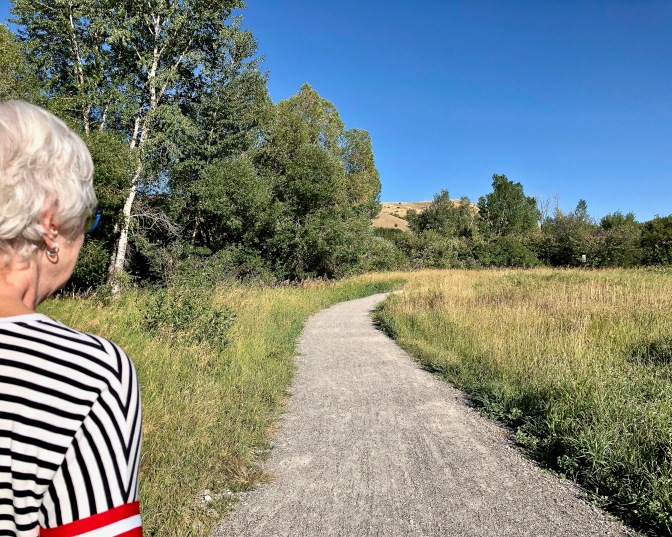 After checking into our motel, we found reclaimed wetland with walking and biking paths (and a few statues).  We walked happily through nature for about half an hour.

I looked for a place to have supper near the motel.  The closest place that was highly rated was part of the Best Western.  I’ve had bad luck with motel restaurants, but it was rated very highly on Yelp.  We went in.  It was large and packed, and we had wonderful food.  Another one of my prejudices shattered.

Tired of motel breakfasts, we found a small cafe down the road.  It was surprisingly modern, with lots of gluten free options.  Breakfast was a bit strange but good.  I began rethinking Bozeman.

Yesterday was really pleasant with no interstate highway travel.  Today would also be a low-mileage day, so I found side roads to get most of the way without being on the interstate.  The land is beautiful, and being on a two-lane meant we could stop when we wanted rather than waiting for an exit.  It was a gorgeous day, and this is a beautiful part of the world, especially this time of year. 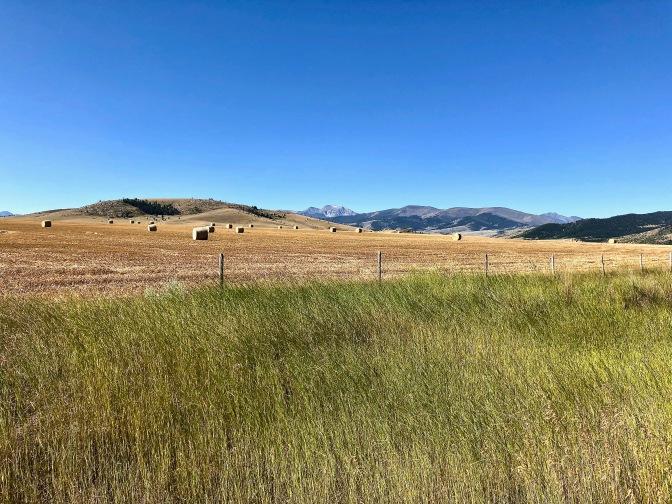 We charged the car and had lunch in Butte.  We’d been to Butte maybe half a dozen times, but we’d never been to the Berkley Pit Viewing Stand.  This is part of the historic district.  The hill above Butte had been named the richest hill in the world.  From the 1800s through 1955, hundreds of mines were dug and millions of tons of copper ore were pulled out.  When traditional mining was no longer cost-effective, they began open pit mining.

The Berkley Pit was the largest open pit mine in the world.  It got to be 1,800 feet deep before the price of copper dropped enough that they stopped mining it.  They shut off the water pumps and let it fill.  The water has the pH of vinegar and contains all sorts of bad things (like arsenic and cadmium).  It is all being monitored.  (And cleaned?  It’s hard to see in the picture but there is a large water cleaning facility on the far shore.)  Anyway, it is quite a sight.

There is no easy way to get from Butte to Missoula on two-lane roads without going way out of our way, so we took the interstate the rest of the way.

(We did stop in the tiny town of Ramsey to buy stamps.  The sign on the building says it is the Ramsey Main Post Office.  The old guy staffing the place looked surprised to have anyone come in.) 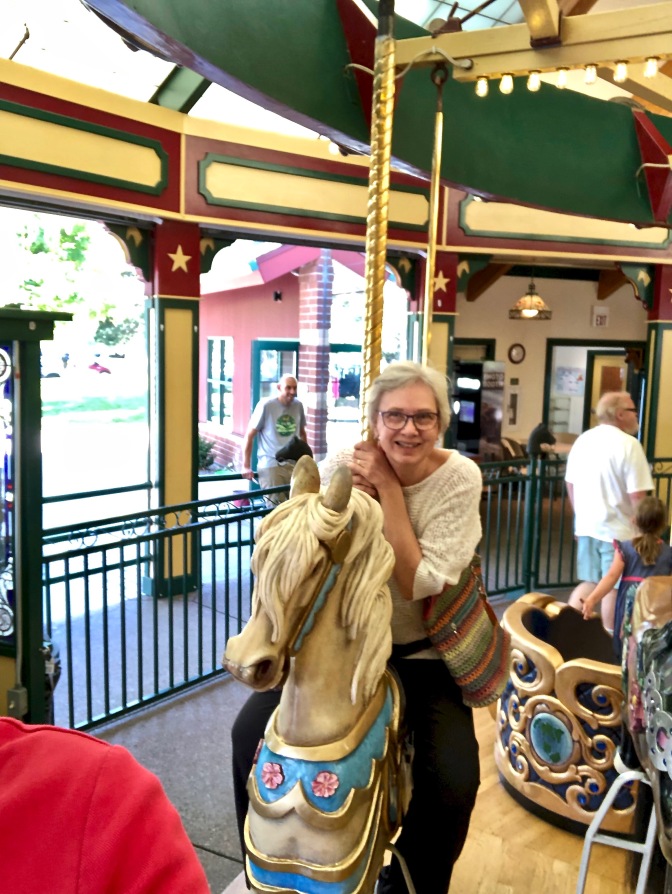 Andrea loves riding carousels.  Her favorite is the one in Missoula, so of course we headed there.  Excited, we got our tokens, waited in line, and got on our horses.  (Mine was Midnight Rose; Andrea’s was Prairie Rose.)  All the animals were carved by local craftsmen.  The music started and we began whirling around, up and down.  Then the mechanism started to shake violently.  And again.  And again.  The man running it brought it to a slow stop.  He checked the weight balance of us riders — all us heavy folks weren’t on the same side.  We started again.  And again it shook, and shook.  He stopped it again, and as we staggered away he gave us back our tokens.  He said he needed to run it once with nobody riding it to smooth it out.  Once that was over, we got back on to try again.  It was smooth that time, but we were still pretty wobbly when it was over.  Andrea had wanted to ride it twice, but we were done.  We’ll keep the extra tokens for the next time we’re in Missoula.