What can I say?  It’s a big state.  We came down from Oklahoma City, through Dallas, and now to Houston.  Tomorrow we head east to Louisiana.

We met a nice couple in a Prius at the charger in Denton.  They were interested in the Tesla.  After talking a while, they asked if we are married.  We admitted it but wondered if that was a good idea in Texas.  She said: Oh, everyone’s getting married now.

In Dallas we had a long, leisurely lunch on the patio of a restaurant with Julie, a high school friend of Andrea’s.  It was a very pleasant afternoon.

That evening, we stayed in Duncanville, on the south side of Dallas.  Our room was next to one of the event rooms.  There was a party going on, with lots of loud music.  We walked to a nearby Mexican restaurant and had nachos for supper, the second night in a row.  (We’re off nachos now for a few days.)  The party was still going on.  We watched an hour-long episode of a Netflix show on our computer (“The Time In Between” — an incredible show).  The party was still going on.  We asked for and got a different room.  Peace at last.

We got a slow start today, not leaving the hotel until about 9:30.  At Corsicana, we stopped to charge the car at the Collin Street Bakery.  Free coffee or tea for Tesla people.  Wonderful pastries.  Free wi-fi.  We stayed until the car was fully charged.  It was hard to leave.

Getting back on the freeway from the bakery, we could see the highway was very slow because of construction.  We stayed on the frontage road, zipping past the freeway traffic, until the frontage road disappeared into high water, eight and a half miles south.  By then the traffic was moving along, and the single-lane traffic ended only a few miles farther south.  We felt the travel gods were smiling on us.

We stopped for a picnic lunch at a picnic stop on the highway.  It was disgusting.  We got off the interstate to go to a nearby state park.  It was closed.  We headed south on the two-lane, looking for a place to eat our lunch.  We ended up on the grass under the trees at the Mt Tabor Church of Christ.  A very pleasant stop.

Charge again in Huntsville, shrouded with the smoke from field-burning.  And then into the outskirts of Houston — crazy traffic building as we continued south.  Charge again at the Tesla showroom/service center.  This is the only place I know of where the showroom and service center and a supercharger are all at the same place.

Traffic on the beltway to our hotel was awful, complicated by a truck hauling a manufactured home taking up two lanes.  We were glad to get here. 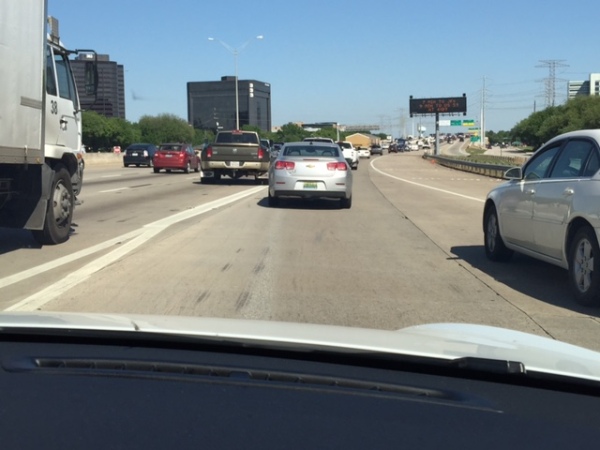 The plan we started with is to return from Florida along I-10 to Houston, then up through Dallas, only varying from the trip out once we got to Oklahoma City.  Sorry Shirley and Julie, but we are  now exploring a route that would avoid Texas.  Texas is big, but we’ve seen enough of it for a while.