Wyoming is different.  Walking around the motel parking lot in the morning, only two cars are from Wyoming.  One is a state car and the other belongs to the desk clerk.  Most cars aren’t even from neighboring states.  There are cars from Washington, Arizona, Oklahoma, Minnesota, North Carolina, and other states.  Other mornings, in other states, I’ve usually seen at least half the cars having plates of that state, with many more from neighboring states.  Wyoming is a place you drive through to get somewhere else. 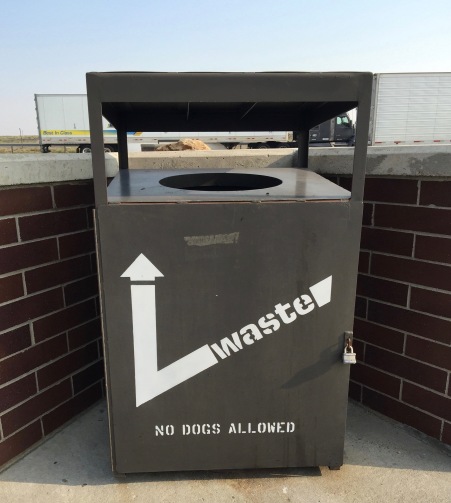 Wyoming is roughly the size of Oregon or Michigan.  It is half-again larger than all of New England.  But there are fewer residents in the state than in the city of Portland.  What that means is that there are vast areas of empty land.  Empty of people, that is.  There are more pronghorn (antelope) in Wyoming than there are people, even in tourist season. 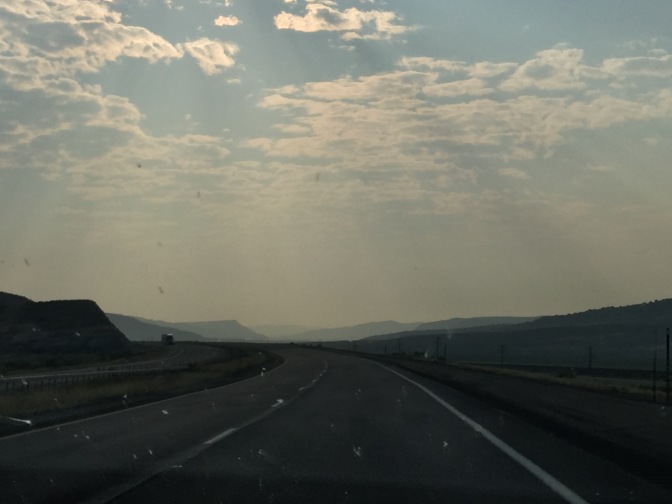 We set off east under clear skies thick with morning mist and wildfire smoke and a dirty windshield.  As we drove, the mist cleared and the smoke thickened.  We passed a sign announcing the continental divide.  We had left the Pacific watershed.  30-50 miles later we passed another sign announcing the continental divide.  We hadn’t re-entered the Pacific watershed, but had finally entered the Atlantic watershed. 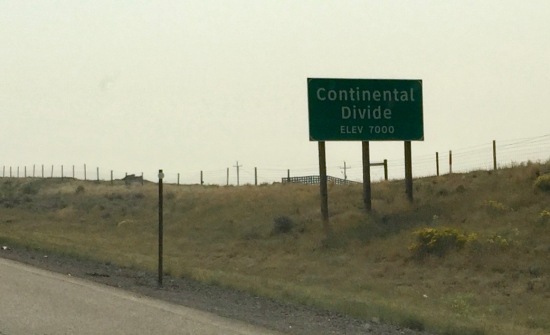 The area in between the signs is the Great Divide Basin, where any moisture that falls goes neither into the Pacific nor the Atlantic but stays in the basin.  However, very little moisture falls.  There is no standing water in the basin.  What very little rain or snow comes either soaks into the ground or blows away in the wind.  This area is the largest divide basin in North America and one of the few in the world.

During the years of migration on the Oregon Trail, the wagons followed more difficult paths north of the basin across South Pass or south across Bridger Pass rather than risk crossing the very dry Saline Desert, as it was known.  The area is stark and can be beautiful.  But today it was cloaked in wildfire smoke.

We charged the car in Rawlins.  As we were leaving town we saw that the Laramie charger didn’t appear on the car’s map.  We turned around and hooked up again to give us more charge and more range.  Andrea napped in the car while I called Tesla road service.  Yes, the Laramie charger was off-line.  We would have to go to Cheyenne or Loveland, Colorado.  East of Rawlins we would cross the hills on the edge of Elk Mountain, and the up-and-down highway would take more energy than the relatively flat run from Rock Springs to Rawlins.

When we got to Laramie, we thought we’d go by and see where the charger is and see if it was working.  It was, so we stayed just a little while to get an extra 50 or 60 miles.

It was lunch time, and the closest place to eat was the truck stop.  I’d eaten there a couple of times when I lived in Laramie and had survived, so we went in and ordered truck-stop lunches (egg and sausage breakfast for me, chicken-fried chicken with white gravy for Andrea).  Before the food came, our friends Jim and Marian appeared.  What a wonderful surprise!

I had written them when I had discovered we’d be going through Laramie instead of Colorado, but I hadn’t heard back.  I assumed they were traveling themselves so we hadn’t waited at the charger.  But here they were!  The truck stop wasn’t their usual place to have lunch either, but they joined us and we had a too-fast two hours of good talk and exchanging current contact information.  (They’d moved, we’d moved, I’d gotten a new mobile number, etc.)

Energized by our visit with them, we set off down the two-lane to Colorado.

One thought on “Wyoming”