We stayed overnight north of Dayton.  Before shutting down for the day, we drove into town to see the Wright Brothers Cycle Shop — part of the national park with sites in various places around Dayton.  We watched a 20-minute movie of the Wright Brothers and how they developed their airplane, and — even more interesting — how they taught themselves how to fly.  No one had ever done it before, so they couldn’t learn from anyone.

In the morning under cloudy skies, we headed east but turned north on a two-lane US highway before reaching Columbus.  It was nice to get off the interstate for an hour.

As we headed north toward Cleveland, the land had more roll to it, making farming more difficult.  There were fewer crop fields and increasing large wooded areas, with just a few trees beginning to turn to their fall colors.

We stopped in Mt Gilead to charge the car.  Unfortunately, the charger is next to a bakery, and so we had to have a fresh cinnamon roll while we did the New York Times crossword, waiting for the car to charge.

Then it was lunch and charge in Macedonia, and then northeast toward Erie, Pennsylvania.  At one point, going through construction, we all stopped for about 20 minutes, not even creeping forward other than to pull up into the spaces emptied by the cars crossing the median to get out of the clog.  When we finally began again, it certainly looked like a flatbed truck had stopped, blocking both lanes, while they emptied Jersey barriers off it.

Tonight we’re in Erie.  If you look at the outline of Pennsylvania, you will see a little tab with a ragged edge in the northwest corner.  That’s were Erie sits, on the edge of Lake Erie.  Despite the construction backup, we got here early enough to drive down to the lake and out onto the spit of land to Presque Isle.  I remember my family camping there when I was young.  Andrea and I spent some time on the beach and decompressed from the day’s drive.  (Down the beach a bit, we saw someone lying on a blanket, bundled up.  It was cloudy, 65º, and with a good breeze coming off the lake — not exactly sunbathing weather.) 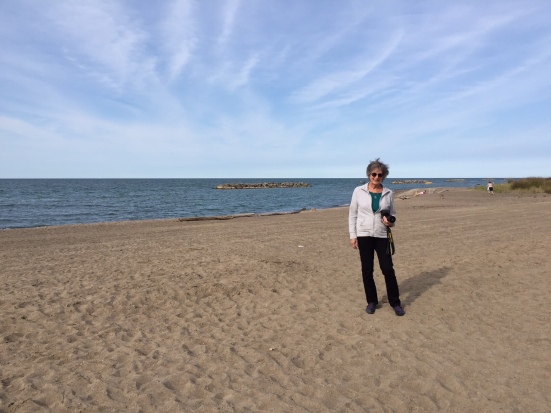 We’ve been on the road for 12 days now.  This is the first time we’ve had two consecutive days when we didn’t visit anyone.  Our traveling settles down into a very pleasant rhythm when we just drive day after day.  We like visiting friends, but we also like the rhythm of the road.

It always takes a while for our things to find their traveling places.   In the last few days, everything in our suitcases has learned where it belongs.  And all the bags know where they belong in the trunk.  We have more room now even though we’re carrying the same amount of stuff.  And loading and unloading the car is easier.  It’s always nice when we reach this point.