When people ask us about our car, two of the questions are, invariably, how far can we go on a charge and how long does it take to charge.  We reply: about 250 miles and 30-45 minutes.  But of course it is more complicated than that.

Like a gasoline-powered car, an electric car’s range depends on many factors, such as speed, hills, whether your driving is steady or stop-and-go, wind, ambient temperature, whether you are using the heater or air conditioner, and so forth.  We usually charge the car to an estimated 250 mile range but we can charge it to 280.  But that’s just an estimated range.  As they say, your results may vary.

Most Tesla Superchargers are no more than 120 miles apart.  Easy peasy.  We set off east this morning along the Southern Tier Expressway, an interstate that parallels the Pennsylvania state line and is south of the Finger Lakes.  Our first charge would be in 186 miles, the longest gap between chargers we’ve attempted.  We had charged the car to its maximum the night before.  We were confident we’d make it.  Confident mostly. 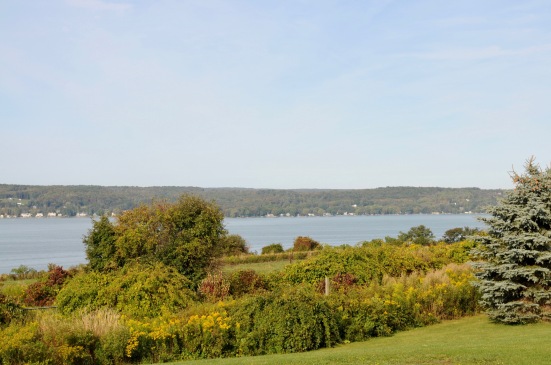 Western New York is a series of wooded hills in almost a corrugated pattern.  This pattern creates narrow valleys separated by long, steep-sided hills, most of which are heavily wooded.  The interstate was surprisingly flat, following first one river then another.  The woods are mostly of hardwoods, with some trees just starting to turn to their fall colors.  In some areas, dense white clouds hung low over the valleys, just high enough that the fog was never a problem.

The first mountains are the Alleganies, which are spelled Alleghenies across the border in Pennsylvania.  (As far as I know, they are pronounced the same.)  As we headed east, we left that watershed and the hills became higher, broader, and of less regular arrangement.

As we came east, there were fewer farms, more trees, and more small towns, many with small industries.  I think this kind of area is what people think of as the old America — farms and industry and towns all mixed together, surrounded by wooded hills.

Yes, we made it to the charger in Painted Post, just west of Corning.  We had 76 miles of charge left.  The next charger was in Binghamton, a mere 78 miles farther.  No sweat.

Tonight we’re in Oneonta, on the Susquehanna River.  The Susquehanna flows from Otsego Lake at Cooperstown and is pretty small here.  But it is a great river by the time it goes through Harrisburg, Pennsylvania and flows into the north end of Chesapeake Bay.

We checked into the motel, and Andrea brought half the bags up to the room while I parked the car.  By the time I brought the rest of the bags up I wasn’t sure of the room number.  At some point, perhaps now, the room numbers get fuzzy in my mind since there’s a new one each night.  In all of my traveling, though, there was only once that I had to go back to the desk to ask what room number I had been given.

One thought on “New York”