I heard the desk clerk at the motel telling about a woman who left all her car doors open while loading it.  When she was ready to go, she found a chicken inside the car.  We were careful and said goodbye to the Yuba City chickens. 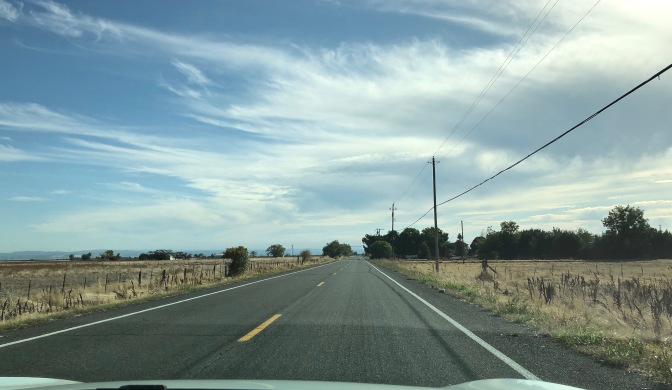 On the way to our first stop, we missed a turn and ended up taking some back roads instead of the highway.  It was a nice change.

We stopped for lunch in Placerville.  There is a charger there, but Andrea began talking to a homeless woman sitting on the ground in the corner of the parking lot.  The woman warned us that there was a man who threw rocks at the cars.  It wasn’t clear to me if it was at any car or just Teslas, but we decided that we already had enough charge and would take the car with us rather than leaving it plugged in while we went to lunch. 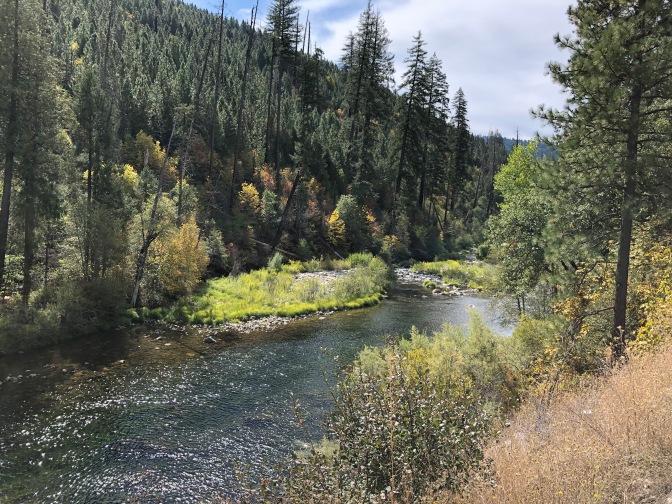 Our planned route was to go back to the Interstate and climb up to Truckee, near Donner Pass.  Andrea suggested we stay on US 50 and go up to Lake Tahoe.  Because we hadn’t charged completely in Placerville, I was a little hesitant.  But we went, and it was a beautiful drive.

The roads were busy, but I was glad it was neither a weekend or either the summer or winter seasons.

We continued north on the west side of the lake.  We saw a sign warning that the road would be closed on Oct 13 for the Tahoe marathon.  It must be a brutal run, between the altitude and all the hills.  At one point we had climbed a steep grade and drove along a ridge no wider than the road, with very steep drops on both sides.

When we stopped at an overlook, I heard German spoken as well as an East Asian language.  (I can’t tell one from another when I hear them.)

Leaving Tahoe City we saw a black bear cross the road.  It was gone into the woods before we could even think of pulling out a camera.  We did see it — honest!

2 thoughts on “Into the Hills”