Despite the snow and ice when we crossed Wyoming a couple of weeks ago, it has always seemed to be late fall on this trip.  But this morning, it somehow felt like the first day of winter.  We woke to freezing temperatures under clear skies.

Tired of motel breakfasts, we went into Billings to eat at the Red Rooster.  There were other patrons — probably locals, judging by the dusty pickups out front.  The daily special was cinnamon roll french toast, but we had buckwheat pancakes instead.  When we asked the waitress about them, she said she got organic buckwheat flour from Bob’s Red Mill.  The world is smaller all the time. 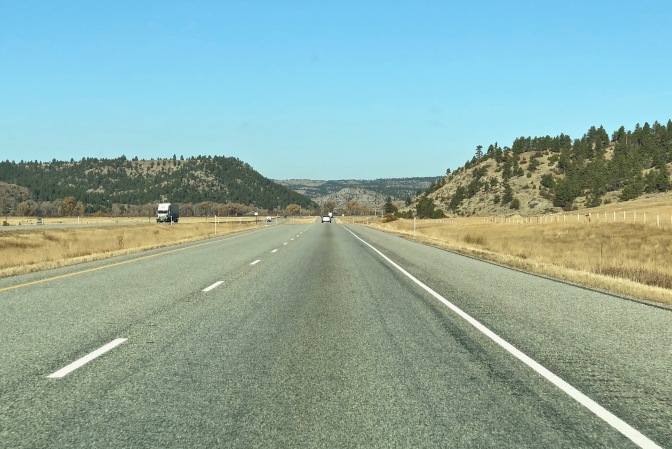 Going west, the interstate follows the Yellowstone River.  Once we left the clutter around Billings, the land was beautiful, with grassland and cottonwoods sweeping off to the mountains.  Most of the higher peaks have snow on them. 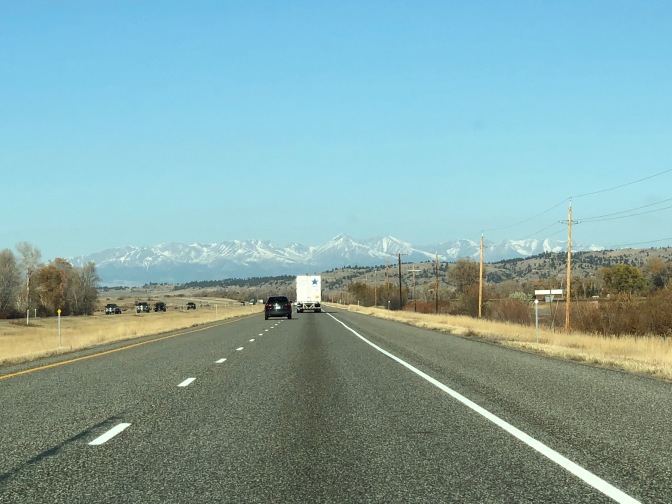 We stopped in the tiny town of Big Timber and again in Bozeman.  Then it was up over the Continental Divide at Pipestone Pass into the Pacific Watershed and down to Butte, where we had lunch.

This would be a short day, and we considered touring Butte.  But we’d seen much of it on previous trips and, being Monday and after the season, many sites were closed.  We headed south over Deer Lodge Pass, crossing the Continental Divide back into the Atlantic watershed.  We’ll cross the divide again tomorrow at Moira Pass, crossing into Idaho.

Tonight we are in Dillon, Montana.  I had pictured a certain town I’d stayed in several times in my motorcycling days, but this isn’t it.  (I was thinking of Ennis, on the Madison River.)  But we drove into town to look around anyway.  There, sitting on the corner in the sun, were two men.  The one in the western hat said he got too old to work five years ago, when he was 85, so he retired and moved down from the mountains to live in town.

We continue to be lucky with the weather.