The Black Hills were sacred to the people who lived there.  According to treaty between the US and the Sioux (primarily), the area was reserved for the native peoples.  Whites (European-Americans) were forbidden entry by law.  But the Custer Expedition of 1873 sent back reports of gold in them thar hills, and the flood began.  The gold played out before long, but the the native people had been permanently dispossessed.  Now, with sprawl and billboards and tourist attractions beyond count, it is no longer the serene area it once was. 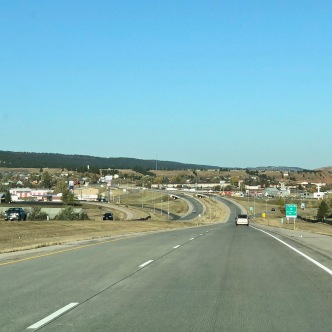 When we left Rapid City it was 55º and the skies were without a hint of clouds.  Once out of the sprawl of Rapid City/Sturgis/Spearfish/etc. the land opened up and we crossed into Wyoming.  I lived in Wyoming almost ten years — longer than I’ve lived anywhere since I was a child — and it still feels like home.

As I drove, Andrea kept trying to get a picture of the groups of pronghorn but never managed one that looks like anything.  Many people refer to the pronghorn as antelope, but they are really related to gazelles.  I’ve always heard that there are more pronghorn than people in Wyoming, and I have no reason to doubt that.  It seemed like that to us today.  The animals spread out in the spring and summer but begin to gather in large groups as winter approaches.  We saw some fairly large groups.

She did get a picture of a snow fence, though.  These fences are about 10 feet high.  Wyoming can get serious snow and serious wind — a difficult condition if you want to get from one place to another.

The land has lost its summer color and dull browns predominate.  As we crossed the high plain we could see a dusting of snow on the Bighorn Mountains.  Closer to the road there were small patches of snow despite the sun and warm air. 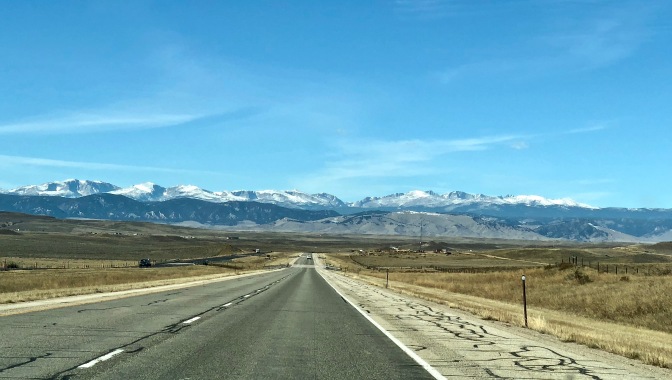 We had lunch at a small, slightly disreputable-looking place in Sheridan, but our salads were wonderful.  There were a lot of motorcycles out in town here and on the highway.  It’s Sunday, sunny with no wind, and the air is 70º — perfect riding weather and perhaps the last chance this year for a pleasant day of riding.

The interstate crosses into Montana and the Crow Reservation.  While there are some farms and ranches, there are also huge swaths of land where the only sign that humans have been there is the road and the fence along the right-of-way.  Fortunately for the Crow peoples, gold was not discovered here. 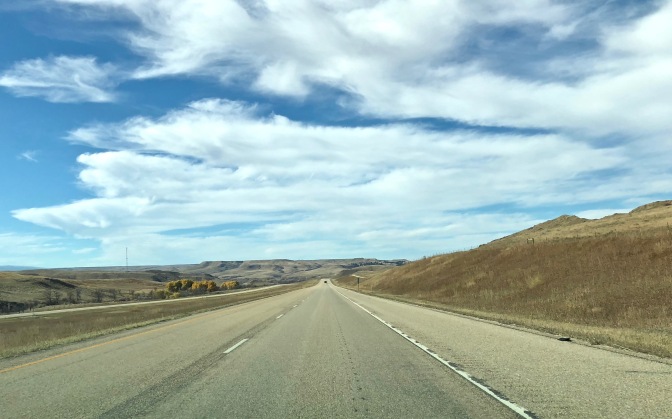 We stopped at the Little Bighorn Battlefield last year, so we just zipped by today.  We are in Billings tonight.

One thought on “Wyoming (plus)”